A Tale of Two Lessons, Part 2

Sorry for breaking this into two parts, but I have A LOT to say here and the last post got long enough. After the bucking spree of my second lesson on the mare I was torn. Part of me wanted to run scared and the other part wanted redemption. Mostly, I wanted to ride my own horse. Sigh.

The hubby told me to go ride for Mother's Day since we weren't doing anything else. Trainer invited me to join a group lesson Sunday afternoon and I figured why not? 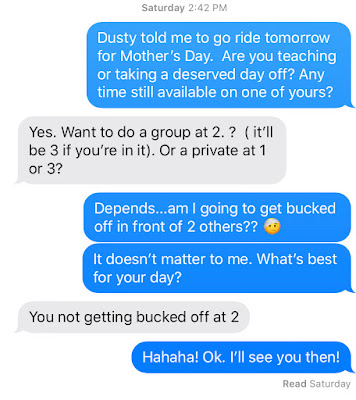 Honestly, I was hoping to see her pull a different horse out of the pasture but there really isn't a different horse available. She has three but one is very strong and tends to run off on even the best riders and the other is currently being leased, so the Appy mare it was.

I could feel my old familiar friend, fear, welling up inside me as she handed her off to me. I gave myself a pep talk and mounted while chatting with my two riding mates for the lesson. I knew the one from a xc outing last summer and really enjoyed riding with her before. The other lady turned out to be awesome as well.

Trainer had mowed an oval trail up in a far field with distance markers and her plan was to work on pacing. My stomach immediately knotted up and I wished fervently that I was on Eeyore instead. He would have been brave and a lot of fun to do that with. I'm not brave and I'm not inherently trusting, so the idea of galloping this mare I knew bucks and rears around an outdoor oval had me sweating. We trotted around it and all three spooked hard at some pheasants hidden behind a fence on the back side. While I never wish fear on anyone, I was really really relieved when the other two voiced concerns about riding their lesson horses (one was on the runaway and the other leases the third horse who is a saintly mustang) along this path at a gallop as well. The plan was scratched and instead we worked on a circle at the w/t/c before heading to some log jumps in the center of the field. 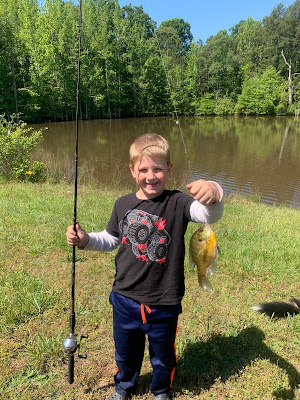 Again, no media, but here is my happiest kiddo catching a large blue gill from our pond Sunday

The logs were tiny. I knew they were tiny. The height was no concern, but I could not jump them for the life of me. I was petrified of this mare under me and her bucking spree of the week before. We did a single log going down hill fine then turned and did a log two strides log combo going up hill and I could not relax. I had a death grip throughout my entire body which resulted in the horse not being able to move forward. Trainer came the closest she ever has to yelling at me about it and I felt like crap as I debated calling it quits right then and there and walking back to the barn. After another pass through  I finally started to relax on her a little which was the exact moment she threw in a small little happy dance buck.

We finished the field work by stringing the three logs together going downhill starting with the two stride combo then getting seven strides to the out over the last log. The first time through she threw in a buck between # 2 and #3 and I just about called it quits for like the third time in half an hour. Trainer lectured me on not locking up out of fear and I took a deep breath and did the line again, this time doing it fine and being able to quit the exercise there.

We then traveled back down to the arena to do a small course and all I could think was "please don't buck, please don't buck" I wasn't enjoying this and I felt like I was ruining it for the other two as well.

The course was shorter with only 4 jumps. 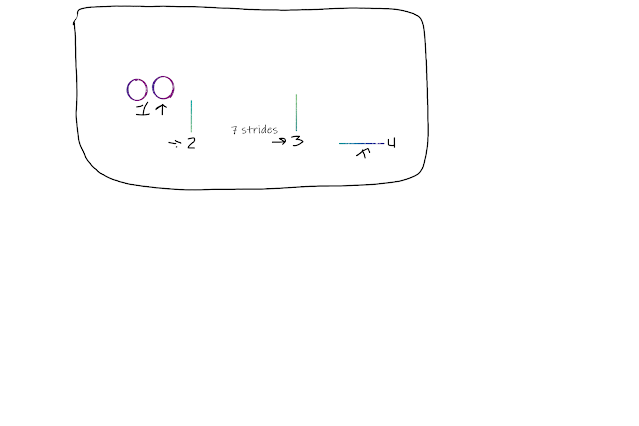 I went last after watching the other two have near flawless runs. Being a bit nicer to myself here, the other two are light years ahead of me in terms of experience and level of riding so they really should have ridden it better, but sitting there wanting to throw up and wishing I could just not, well it didn't really matter to me. Fence 1 was two metal barrels side by side, then a sharp left turn to circle back around to a gate at 2, seven strides to a vertical at 3, then a right circle around 4 to go over it so it was a sideways "S".

I was so darn concerned about those barrels, having never gone over them before, that when we made it over no issue I completely forgot the sharp turn to 2. I felt like a fool and restarted again. We made it over every fence with the correct striding and leads, but Trainer was unhappy with how tight I was and picked apart my seat, my hands, my legs, everything it felt like. I felt like the dunce of the class.

We all ran through it again and this time I stayed up in 2 point instead of sitting because she hated how I sat and it went a lot better. But it never felt good. It felt stiff and the mare was behind my leg the entire time. 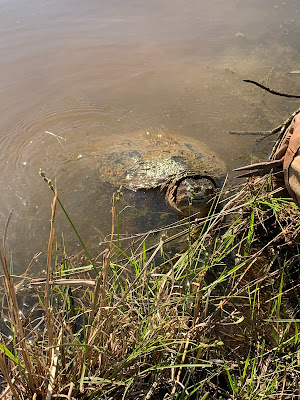 The boys are trying hard to get the cat fish out of the pond. Dusty set juglines but all he caught was this very angry snapping turtle

After that we were all done and sent off to do a short hack through the woods. As we left the arena the one lady turned to me and said "I didn't want to say anything before, but I got bucked off that mare hard last week while jumping. You did a good job with her"

And maybe I should have felt proud of myself or elated but instead all I wanted was to get back to the barn so I could get off her and put her safely back in her pasture. I drove back home in near tears over the last few lessons and how awful I kept feeling.

It was time for some deep introspection and a plan moving forward because my motto with horses is that is has to be fun. Hard work, frustrating, humbling..sure. But at its core it has to be fun and I wasn't having fun anymore.

For starters, I won't be getting back on that mare. I can feel my confidence shot and it took me way too long to get to where I’m at to let this horse ruin it all. I brought Eeyore home 2 years ago today and I refuse to return to the rider I was back then.

With no other rideable options for me at Trainer’s facility, I’ve made a list of places more local to me (she is an hour away) to try out over the summer. One I am really excited about and is super close plus with the package rates I could afford to lesson weekly versus once or twice a month. We will see how it goes and if barns open or not.