A Tale of Two Lessons

With Eeyore out of the picture lesson wise for a while, Trainer encouraged me to hop on her Appy mare and I was happy to do so. She is a tall, leggy bay mare without a single spot on her and I have failed every single time to snap even one picture. Ooops. I will admit to being a little nervous the first time as I had been introduced to the mare once before during my last xc outing. A young lady was riding her and the mare reared at one point, hitting the rider in the mouth and breaking her tooth. I was assured that was out of character and I already wrote about my first time riding her here. It went fine.

I headed up to her facility on May 1st for a second lesson on the mare and...it did not go fine at all.

The flat work went well. In fact it was better than the previous lesson. The mare is certainly a kick ride with the help of a crop as well and is the complete opposite on the flat from Eeyore (and Gem too for that matter) where I spend most of the time controlling his exuberance. The first time I rode her it was a bit of a kerfuffle to get her moving forward but this time she was floating around nicely. I really liked the fact that once you get her where you want her she will stay there until you ask her to do something else. Again, much different than Eeyore who is a ride every stride because each one is different than the last type of guy.

By the time we moved on to jumping, I was feeling really excited about her. Since she knew her job so well, I could focus on all my own faults and flaws. Or so I thought.

We did a simple cross rail as a warm up and the mare just jumps differently than I am used to. She gets super close to the base and then goes more vertical over the jump, but she is honest, brave and will jump anything in front of her. The warm up went fine and we moved on to the course work. 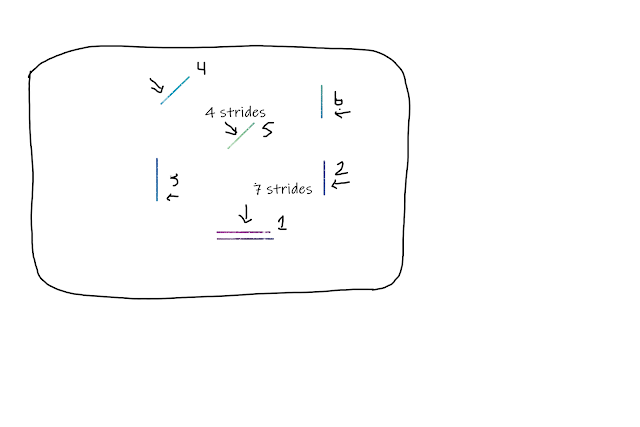 The first time through went pretty decent actually. Trainer had us come in off a right lead canter to the oxer at 1, then we had to get the left lead to make the sharp bend to 2. Thank goodness the mare has a lead change on her because I certainly do not know what I am doing with all that. We put 8 strides in the line 2-3 then got the lead change to the line at 4 and surprisingly got the 4 strides correctly to 5. Then it was another lead change to make the bend around 2 to go over the gate at 6. It was a lot of lead changes and turns especially since I really have zero clue what I'm doing.

I was pretty happy to be finished with that, but Trainer wanted us to go again and get the correct striding between 2 and 3, so off we went and so did the wheels.

We did the oxer at 1 and the mare landed bucking. HARD. She then tripped, went to her knees, got up and bucked again. By the time I got her to stop moving her feet my eyes were the size of dinner plates and I could tell I had no color in my face. I eeked out a "what did I do wrong?" To which I got the reply "nothing, you rode that great. She was celebrating".

That's not my style of party.

We came back around again, a fact I'm super proud of since I really wanted to get off and call it a day instead, and of course I was backed off and rode under powered to the oxer and we biffed it bad. Came around again and cleared it. We made it over 2, got the 7 strides and then she decided to party on the back side of 3 with another massive bucking spree. Don't ask me how I stayed on her. Trainer was grinning and said "anyone else who rides with me would have fallen off. Good job staying on".

I was done. She asked me to trot into 2 alone and canter to 3 and we could be done, so I did but I was scared the entire time while silently begging the mare to behave so I could end this lesson.

On the drive home I was still shaken. I'm not brave and I don't like feeling that way. I know everyone falls off sooner or later and I've met the ground more times than I can count with Gem. Even once with Eeyore when he turned me into a lawn dart about a month or so after I got him. But this one really shook me to my core even though I stayed on and when I was given the option for another lesson, I considered saying no because of it.

Posted by Sara (Moonlit Pastures) at 7:46 AM