All week I waited for my latest throat swab results to come in. My plan was to hear on Thursday as usual and then have my life semi back for the weekend. The results were delayed due to an increase in testing and then Friday....the damn center closed for the holiday so no go on getting results. I was extremely frustrated to say the least. My own office was already planned to be closed Monday for the holiday so that both ladies could get a holiday day (the one doesn't work Fridays so I wanted to be fair) but this makes life tricky. As long as I get the negative result I need on Monday, I'm fine. If it is still positive then canceling patients already scheduled for Tuesday gets tricky with a closed office. Ugh, ugh, ugh. Plus it means yet another weekend stuck at home. Why on earth we don't have POC testing, I don't know.
On the Eeyore front last week was week 3 of our rehab program: three 2 minute trot sets with 5 minute walk breaks and a total of 30 minutes ride time.
I spent the first part of the week working on the 20 m circle. With the added trot set I could focus an entire 2 minutes per direction and then spend the last one at large. The shortened warm up meant that I had to come into the ride more focused and get to work sooner as I only had 7 minutes before the first trot set and I wanted to get the most out of it.
Eeyore continues to remain sound and pluggish. It didn't help that I rode most days around 2 pm when it was blazing hot out, but I had an outdoor project I was working on that was very physical and I wanted to work on that in the cooler morning temperatures. Still, I wasn't super happy with the extremely slow and, more importantly, behind my leg ride Eeyore was giving me.
So yeah part was due to the heat, another part was probably due to him being super bored with circle work, but a bigger part was that I was allowing it. Since the beginning of our rehab time I had fallen into the abyss of "toodling" when we walked and this spiraled quickly down to a barely moving shuffle and a louder than I've ever needed before aid to trot. Picture pony club kicking. The horse that I've fought for years to slow down.
Which like sure we don't need to be setting walking speed records, but the walk still needs a purpose and it still needs to be in front of my leg. The latter part of the week I decided to forgo the circle and work on reinstalling forward and a snappy response to a light aid.
I rode earlier in the day on Friday to take the heat out of the equation though it was already near 90 at 9:30 am when I climbed aboard. My only goal was to get him moving and keep him in front of my leg the entire time. I also insisted on a quick response to my aid and once the trot set was done he couldn't just plop onto the forehand, put his nose on the ground and shuffle along like his namesake.
It took a bit, but he got the memo. A lot of other cool things are happening too. Not only has all this trot with no cantering in sight resolved his penchant for zooming off at the least touch of his side (or pretend aide as I like to call it) it is also driving home the point that he needs to remain focused on me no matter what.
For instance, the three other horses were moved to the pasture by the arena Friday. They all left the morning nap spot to come watch us ride and Eeyore tried his best to stare at them the entire time. Instead of letting him like I used to, I used every instance of loss of attention to make him turn, or speed up the walk, or do something. Anything that said "hey, I'm still here and more important".
I'm really interested to see how this all plays out once we can canter again, but I still have a few weeks to get there. 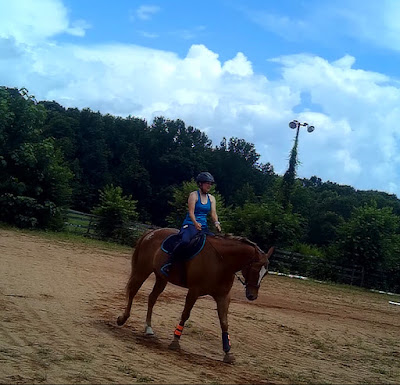 This week start another move forward and a hopeful return to work which will shift riding to the evenings when he typically gets turned out in Fat Camp with Gem. I'm interested to see how this plays out under saddle. Will he be more "up"? More distracted? Pissier? I think he has enjoyed the break from his stall to get out and stretch his legs in the middle of the day but once I ma back at work that obviously can't happen. We will find out!
Posted by Sara (Moonlit Pastures) at 8:00 AM