It Has Been Quiet For A Reason

The blog has been rather quiet lately because....well because Eeyore is lame again. And I just can't handle it at the moment.

His vet check had gone so well the end of July with the green light to put him in small turnout and to begin canter work again. I rode that same day with Trainer AB and she said he was moving the best he ever has.

I continued the short canter set work at home just as prescribed by substituting the middle trot set with canter work making sure I went both directions and limited it to 5 minutes total which honestly I didn't even do a full 5 minutes at first choosing to slowly work up to it.

He was happy to go left from the get go but the right lead was sticky which it never has been. He's been tricky in a lot of ways but getting the lead has never been an issue. He did pick it up but it was hard to do and he quickly dropped back to a trot instead. Again, not like him.

At first I thought it was a weakness issue but it has persisted and now he has a small amount of swelling back in the right front leg. I jogged him on the line the other day and while he is not head bobbing he is most certainly NQR. Sigh. 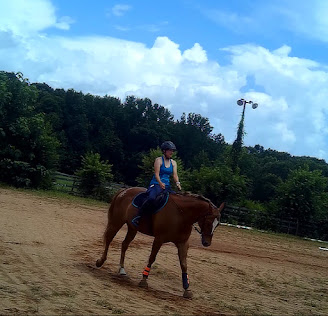 And honestly? I'm about to give up. I don't even know anymore. He is now back on full stall rest with a standing wrap (had left the wrap off during the day in the pasture and wrapped him in Fat Camp overnight), the farrier is due out this week and I will ask him if he sees anything, and then I don't know. We are supposed to be on limitless flat work come September 1st but yeah...doesn't look like that is going to happen.

I know horses suck. I know I got really lucky with Gem being completely sound for 10 years of riding and competition. I know none of his injuries have occurred while riding. They all happen from stupid ass pasture injuries. I know. It doesn't make it suck any less to have this horse in my yard that I adore and who will not stay sound. I've had him a little over 2 years and for more than half that time he has been hurt or in rehab.

If we didn't have 3 other retired horses I'd give up on him and get another horse to ride. But even that isn't a good answer because the dude loves to be ridden, loves to explore, loves to jump. He is only 10 (maybe 9 but I think 10) and he can't be a pasture puff for the next 20 years. I'm debating selling him if I can get him sound to sell. I'd be 100% honest about him and his time with me. I really think he'd do better in a different situation. He loves being in his stall and thrives off a busy barn yard plus he does better with more frequent riding than I can give him so I think he'd do amazing at a busy lesson facility with individual turnout for short periods. Its the life style he came from and I think maybe the semi feral 24/7 outdoor large acre pasture lifestyle isn't suiting him.

But ya know - who would by a highly accident prone horse with a heart murmur? I don't know.

And it sucks because the year he spent sound and happy? It was AMAZING! He took me over jumps I never thought I'd jump. He built my confidence up and dared me to dream. And now he remains lame and I'm so done with it all.

I have no current plan beyond back to stall rest, have the farrier look at him, back down to walk work only and re evaluate in 2 weeks. If no better we will re appoint with the vet and see what is going on. Until then I'm concentrating on getting Wyatt's school year off to a great start, realigning my business goals and hiking my blues away.

Posted by Sara (Moonlit Pastures) at 8:00 AM

Email ThisBlogThis!Share to TwitterShare to FacebookShare to Pinterest
Labels: Eeyore