Folks, I’m so stinking proud of my kiddo. The original event was 100 miles in 100 days though they have now extended it into January I believe. Still, I wanted to stick to the original event hoping to do it before the end of October.

We had gotten some good early miles in during August when the weather was behaving and school wasn't in session yet. Things got a bit trickier once school started, but we managed when we could and kept at it.

Wyatt was a trooper and logged every single mile with us. He biked about half of it and walked/hiked the other half. 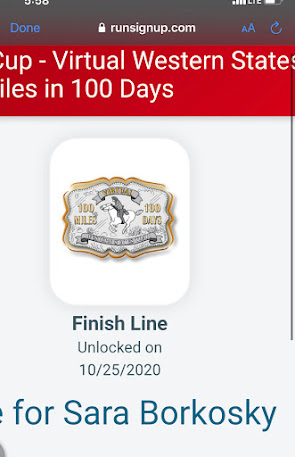 It was a really fun family activity and got us all out being more active when some days we probably would have opted for the couch instead. In fact, I'm a little bummed that the challenge is now over. There are a ton of virtual challenges out there right now though, so I am already researching others to join. Who knows - maybe one day Wyatt will have a whole collection of completion medals to look back fondly on.

Posted by Sara (Moonlit Pastures) at 7:51 AM