It has been two weeks since Hamilton stepped off the trailer and walked right into all of our hearts. He has continued to be the most easy going, sweetest horse I have ever had the pleasure of being around which was exactly what I was hoping for after two years of dealing with the Big Orange Butthead.
He is adjusting well to the semi feral life style though he isn't always the happiest about it. He is a bit of a weather wimp. During the hurricane that blew through the first weekend he was here, the other three were out in the middle of the cold rain grazing. I watched as Hamilton pinned his ears and grumbled his way over to the trees. He was not a happy camper. 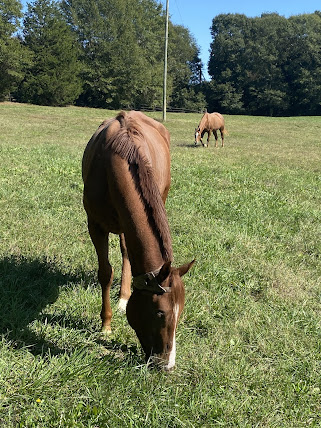 He completed his Powerpak dewormer and is half way through his GastroGuard. Dusty says he has gained close to 75 lbs already, maybe more like 100, and he is looking so much better. Nearly all his skin funk is gone with only a few remnants remaining on his hi bones and his back legs. The weather is supposed to be nice this weekend so I am hoping to sneak in a bath and get ride of the rest of the funk. I'm not thrilled with his dull coat (shiny coats are a personal pride of mine and even Eeyore shines these days) but I know it probably won't improve too much until his spring shed. 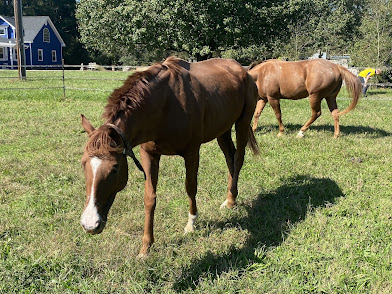 My farrier swung by and saw him last week and trimmed him up. He is better on soft ground, though lacks confidence, but is still super ouchy on any hard ground or rocks. Pathetically so, but I'm learning that he is just a big huge pathetic baby when things aren't perfect. Breaks my heart which I'm sure he knows full well and uses to his advantage. 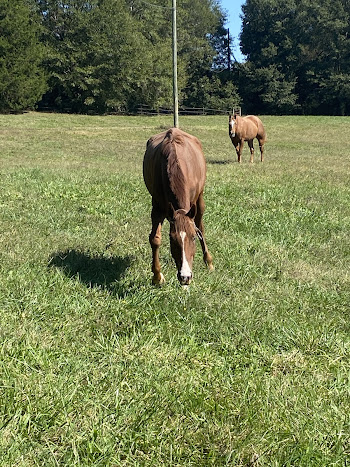 He has learned the routine and meets us at the gate for breakfast and dinner every day. He lowers his head to allow Wyatt to slip his halter on/off and leads like an angel for him. He is always up for social time in the pasture though he isn't as snuggly as Eeyore. He is a good middle ground between the aloof Gem and Pete duo and the obnoxious in your face Eeyore.
My only issue with Hamilton is that he cribs, a bad habit I knew he was coming with but since Eeyore is 90% beaver I didn't really mind adding another. He cribs less violently than Eeyore but more frequently. Eeyore only cribs after meals - like a cigarette after sex. Hamilton will crib in the pasture so we tried a cribbing collar on him outside. Eeyore only wears his when left in the barn for an extended period. Well, Hamilton has very sensitive skin and quickly got a sore from it. I'm going to have to get him a fleece lined one though he is cribbing less and less outside and eating more as he has grown more comfortable in the herd.
I have found myself staring at him longingly wanting to feel what he is like under saddle. His weight is improving but his topline is awful - something that riding long slow miles will remedy easily. Hopefully by the time I am recovered from my next surgery I will have found a saddle to fit him and can start a slow process of getting to know him under saddle.
Posted by Sara (Moonlit Pastures) at 8:28 AM