I'd like to formally introduce you all to the newest member of our herd.....

History Earned...AKA Hamilon...had 15 starts with 1 first, 2 seconds and 1 third finish and a total of $23,000 in earnings before his lack of speed earned him a retirement from the track.

Hamilton has been a pleasure to have at the farm since his early, pre dawn arrival Monday morning the 5th. He stepped off the trailer after an arduous 17 hour ride and led into the barn without hesitation or concern. He was exhausted, dehydrated and needed time to relax and come out of his shell. 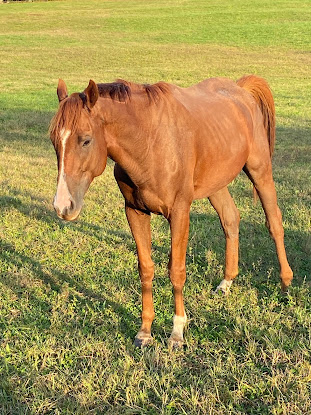 He has an old man soul that speaks directly to my heart and the kindest big brown eyes I have ever seen. He needs a lot of groceries and his skin is funky but in the 5 days he has been here he is already showing a difference. It won't take long before we have another fatty on our hands. 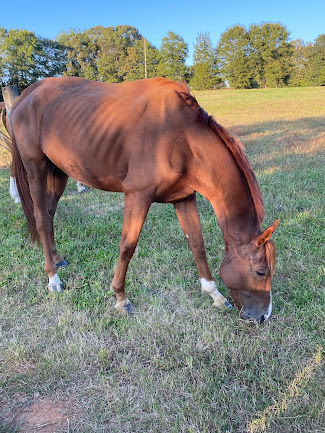 I adore his kind heart above all else. The third morning he was here Wyatt wanted to bring him in from the pasture. Hamilton is MASSIVE. I've been calling him Baby Bullwinkle which shows my age if you understand the reference. Anyway...Wyatt can't reach his head. Not even close. So there Wyatt is flapping around and jumping inches from Hamilton's face in the morning dark trying to get the halter over his head. My other three would have disappeared faster than you can blink, but not Hamilton. He stood there patiently staring at Wyatt and not moving an inch until Wyatt managed to get the halter on and then led quietly into the barn for breakfast. 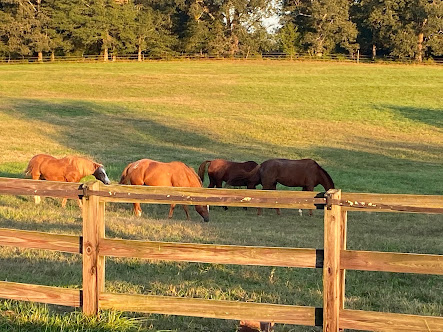 Slowly but surely his personality is beginning to show through as he settles in and comes to terms with his new life. He remains calm, unflappable and easy going. We have been dosing him with a dewormer in the morning and Gastrogard in the evening and let me tell you Baby Bullwinkle HATES IT. HE HATES IT. When we first got Gemmie 11 years ago (holy crap where did that time go?!?!) we ran her through a power pack and it took three of us rodeoing with her to get it in her. Little mare could rear. Hamilton could easily be even more difficult since he has a neck the size of a giraffe and god help me if he ever rears. Know how Hamilton shows his displeasure? He lowers his head so I can dose him, then gives me a look of heart wrenching betrayal that pierces my soul and hides his head in the corner of his stall. All of 30 seconds later he peaks over his shoulder and upon seeing me still there his ears perk up and he comes over for a hug.

Hamilton is currently barefoot but he is sore footed. My farrier is coming out next week to look at him and make recommendations. I'd love to try to keep him bare and see if we can't get him more comfortable as his hooves adapt but I also know that no matter how and what we tried for Eeyore that guy just can not go without front pads and shoes all around so I am open to water he needs. I'm hoping to make it to the local tack store before they close today and see if they have moose sized boots. He doesn't come close to fitting in Eeyore's pair and regardless of barefoot or shod I want a pair on hand just in case. They have saved Eeyore's feet numerous times over the last 2 years. 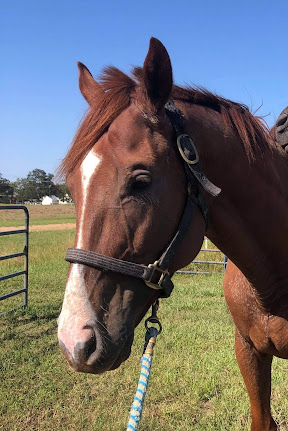 I need to go saddle shopping at some point for him though I have no plans to get on his back until he has gained some significant weight and his feet are comfortable. No rush.  I have no experience in saddle fitting high withered, slender horses since all mine over the years have been wide backed with no withers. It will be a learning curve but there are a few nice consignment shops I can utilize when the time comes. He is only 4 so I have no interest in investing any real money into a saddle until he is fully grown and filled out. I only need something to get us by for a while.

My bigger need is a larger trailer. Our hopeful plan is to get Hamilton trail ready. Not sure if it would be me or the Hubby riding him versus Eeyore but the the idea is to shove Wyatt on Gem between the two chestnut geldings and have fun on the trails. We need a trailer big enough for all 3 horses to do that. No real rush on this. I want to do a lot of ground work while he builds weight and then expand to the trail making sure he won't panic or bolt while we are out there. Nothing about his current demeanor has me worried but you never know what 500lbs will do to a horse. If we can start family trail rides in the spring I will be happy. If I eventually decide to start eventing him, that would be even more amazing but baby horse has no real role here other than being kind. We will see what the future holds for him and at 4 he has all the time in the world to grow up before I ask much of him.