Hamilton's feet have adjusted to the barefoot lifestyle enough that easy work on soft ground is now acceptable to him. When he first came to us he was tip toeing around in the pasture and if he saw a rocky spot (mostly by the pasture gates) he would get the most forlorn look on his face before creeping ever so slowly through it. Nowadays he canters up to the gate at meal time and while he still tenderly walks across the gravel areas, he is growing in confidence. He is even walking normally on the cement aisleway.

Given this, I figured it was time to play with him a little bit. Dusty in particular wanted to introduce him to some ground poles and low jumps to see where his brain is at. We both are figuring that it would be nice to introduce some of these things on the ground first rather than from on his back plus I am having my hysterectomy next Monday so will be out of the saddle until 2021 so playing on the ground is where it will be at for a while.

We started with some ground poles and trotted him through. Or well tried to..... Hamilton isn't in much of a rush to get anywhere.

After a few times through that, we added a small vertical

Eventually we worked up to a vertical to a cross rail

And then the poles to the jumps

As you can see he really wasn't very excited about the whole thing. As far as I know he has never seen nor gone over any poles in his life yet he just nonchalantly went over everything we asked without a fuss.

What I adored seeing was that after he went over something new he would lick and chew and you could see him thinking about what he just did. It didn't always translate to a better effort the next time but he was thinking about it and I really, really liked that.

I also really liked the fact that he never got flustered, never rushed and never spooked or got nervous. That may change once I am on his back but so far he has given me no signals that he will be anything but awesome to ride. 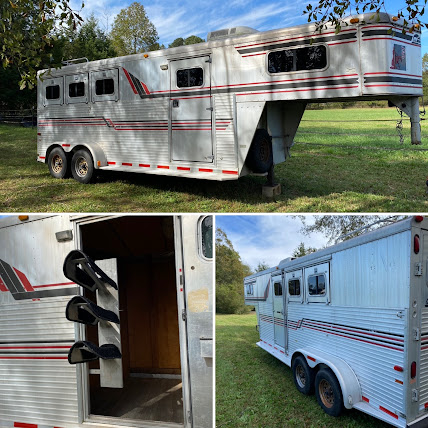