Up until 4 pm Sunday afternoon I was having one of the absolute best weekends I've had in recent memory. It was perfection. Until it wasn't...but I will get to that.
It started on Saturday morning when I had the random idea of heading to Aiken to hit up Dover for the pile of items I've been needing to fully outfit Hamilton with his own tack. I had driven up to Tryon a month ago only to find out that Dover had moved out of TIEC which was a big bummer and waste of time. I've been putting off ordering online hoping to somehow make it to s brick and mortar store sooner or later.
After the kiddo's parkour lesson we headed south and ended up having a rather epically awesome day that included spending way too much at Dover, snagging ice cream for the kid at the local Sweet Shoppe, hiking 5 miles in Hitchcock Woods and ending with the absolute best shaved ice creation at the Vampire Penguin.
Then Sunday came and it got even better.
I hadn't ridden Eeyore in way too long - maybe a week and a half I think - and he came out the OG Eeyore. In fact, he was so full of himself I threw him on the lunge to get his bucks and wiggles out before I got on him. I can't even recall the last time he saw a lunge line. Under saddle was a major reminder of what I used to deal with on the regular. He was UP, he was throwing me the middle finger with every request I made, and he was stiff as a board. I ended up letting him canter to his heart was full and the sweat was lathered up and then we got started on what I had wanted to accomplish. Sheesh horse. I ma so glad we moved past that behavior.
After Eeyore I was hesitant to ride Hamilton. I just didn't have it in me to have another ride like that. Having just dropped a college education on his new tack and needing to see if he was still oddly lame, I new I had to tack him up and see what I had. And what I had was the best ride on him to date.
He was soft, he was calm, he was sound, he was handsome in his new gear. It was the exact ride I needed after getting off the Big Orange Butthead. Inexplicably, the Hubby wandered down to the arena while I was riding, another event that hasn't happened in ages, and had his riding helmet with him. He wanted to hop on Hamilton and take him down to the pond. I wasn't going to argue that!
He did a little work in the arena first and then they headed out. 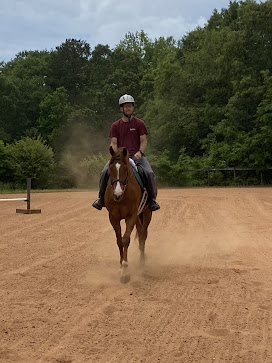 Hamilton was a happy camper to walk down the driveway, past the house and into the woods. A feat I can't get Eeyore to do without rearing, bucking and trying to bolt back to the barn after three years of attempts.
Dusty said he wanted to trot in the woods but he didn't let him. 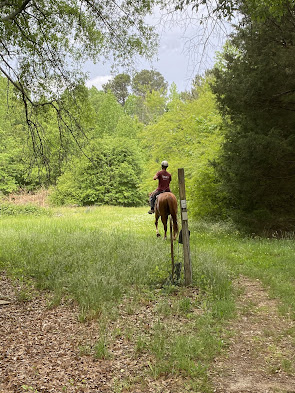 His only issue came when he popped out of the woods to the pond itself. Then he started trembling and was scared of the water. A few passes back and forth saw him calm down enough to head back to the barn. 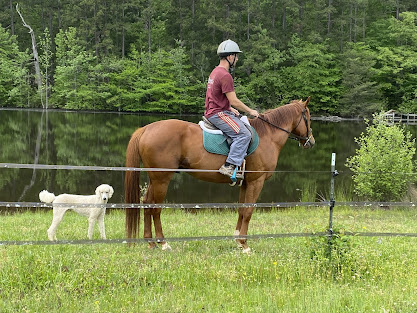 If that wasn't awesome enough, once they were back Wyatt asked to ride so I grabbed all my old endurance gear that I miss so much and tacked up Gemmie. She was foot perfect as always with kiddos on board.
This got me dreaming an scheming of summer family trail rides and finally getting to us the three horse trailer I bought in the fall that hasn't moved since. I was riding a pretty big high until Wyatt had a accident on his bike jumping a ramp and broke his right arm. That was a pretty shitty end to a great weekend. Thankfully it is a simple buckle fracture requiring a splint for 6 weeks without surgery needed. He is feeling better today with the splint in place.
Posted by Sara (Moonlit Pastures) at 1:08 PM