This past weekend we made the 12 hour round trip to pick Hamilton up and bring him home. 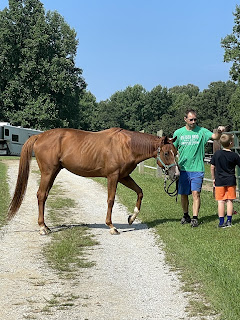 All summer I received video and picture updates of his progress at summer camp and I must say that I am very glad I sent him up there. 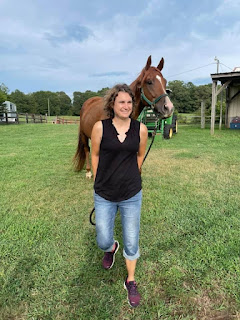 He spent the last two months out on the trails 4-5 days a week. He followed, he led and he went solo. According to AW he never put a hoof wrong. When he follows another horse he will do anything without hesitation. When he goes solo he needs some added confidence from his rider when something new or scary comes along, but he never once spooked, bolted or anything else scary. 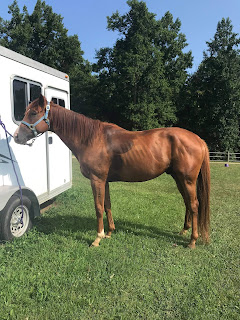 She even cantered him in open fields and along long double wide trails and said he was always a gentleman, coming back to a trot or walk immediately upon being asked. Her final analysis was that he had the most amazing brain of any 5 year old she had ever met and that he was going to be a bombproof awesome guy. Which is exactly what I wanted.

Now that he is back home my main focus is adding weight back on again as he did lose a bit up there. I think I’ll forever be fighting this as he gets nice and chunky when not in work and then immediately drops it again. I’ve started him on a round of gastroguard just in case the travel upset his stomach as well. I’m rattling some ideas around my old brain to figure out how to manage life with both riding horses back in it. I only have one butt and limited time. I’m thinking I may try to find a horseless rider who would want to join me on trails and hunter paces this fall and winter and can ride Eeyore with me on Hamilton so both get good exercise. Im not interested in a lease type scenario as I wouldn’t be comfortable having someone on my property without me here, so really just someone who wants to sit in a saddle for free and make a new friend. How to find that person is a bit of a question at the moment, but maybe something will pop up.