By now most people have heard of the three main types of fun. Type 3 being no fun at all. Type 2 is fun after the fact when you have “survived” it and are thinking back on it. I’ve lived most of my life solidly here. Then there is Type 1 fun: actually having fun while doing it.

Hamilton is introducing me to the world of Type 1 Fun.

For the third weekend in a row I loaded up the trailer and hit the road. I can’t even remember the last time I rode this much. It feels good to be back at it. The last time I rode at Scotsgrove was in 2015. It was memorable because a) Gem was recovering from her laceration which meant that I took Pete for my first ever trail ride on him and b) I locked the keys in the truck when I arrived so I rode the trail and then called the locksmith when I got back.

This time I had both chestnut boys with me and was meeting a friend who volunteered to ride Eeyore and keep us company. I have a whole post coming about loaning out my horse as this experience taught me many things and has changed my opinion about the whole "do you let others ride your horse" conversation. More to come another day on that.

On this day though the sun was shining, there was a cool breeze and the trails were in perfect condition. I couldn't have ordered a more perfect day. 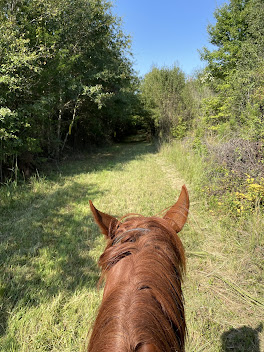 There were single track trails that wound through the woods providing shade on a morning that was growing increasingly warm. 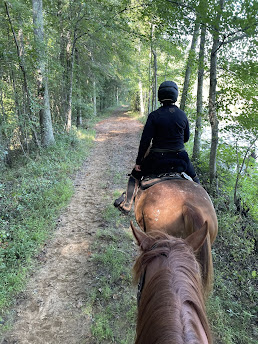 There were open fields and gorgeous mountain views. 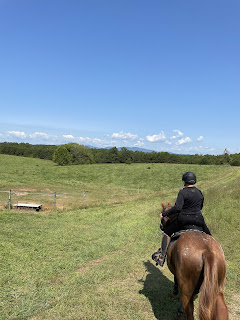 The only spot along the entire 10 mile track that Hamilton gave two shits about was right at the half way hold. We had been following a pasture fence line for quite a while when we popped into someone's back yard. There were children playing and dogs barking, neither of which bothered either horse. Then we came to a little log pile and both boys gave it the hairy eye and a wide berth. I chuckled because honestly all I do is giggle like a 12 year old when I'm riding Hammy. 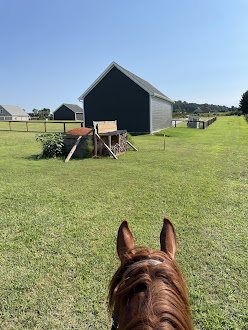 Unfortunately the second half of the ride wasn't as carefree as the first. Right from the start things got screwy. We left the hold and followed the ribbons on our left as we had done the prior 5 miles. I saw a ribbon on the right and thought it was odd but a few strides up ahead there was another on the left so we carried on...right back to the hold. Oops. We back tracked and found that right hand turn again and this time took it and carried on. We probably added a good mile if not a little more. Oops. 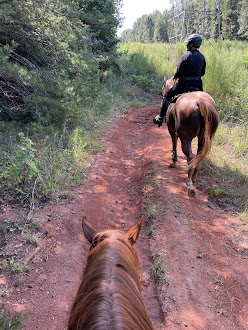 The biggest issue with the added mileage was that we lost our bubble and quickly ran into what I am referring to as "the incident". We were traveling down a super steep hill on a track that was about 1.5 horses wide and surrounded on either side by kudzu vines. You do not want to ride through that as it can get tangled around the horses' legs.


We were taking it easy walking down the hill because a) Eeyore LOVES to run down hills like a toddler rolling and C was not comfortable with that and b) Hamilton has yet to figure out his super long, lanky legs. A nice group of riders came up behind us, slowed and asked to pass. We had an easy spot to pull over, so we did and things were good 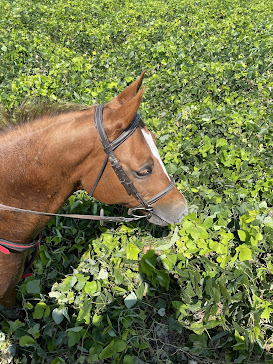 And then another group of 5 riders came flying up our asses. They were hauling down that hill. They never said a word. Never slowed. When they were nearly on top of me I told them they needed to slow down and walk behind us until we could safely pull over. The bottom of the hill with a huge flat access road was 100 yards away. They could wait. Or so I thought.
Instead they squeezed beside me, pushing me off the trail into the kudzu while side swiping Hammy. I barked at them to WALK and the lady laughed saying "I'm trying" all the while kicking her poor horse on to gallop down the hill. She is lucky she didn't break that poor horse's leg. So they get by me and Hammy who honestly could have cared less about the ordeal because that is just who he is, but then they came up on Eeyore who DOES care about horses galloping up his ass.
He half freaked out as the lady pushed past him at a tranter, shoving his over a ditch. Eeyore let out a small buck and tried to canter off with this lady. C pulled him up within two strides, but her saddle (which did not fit him and pissed him off the entire time but more on that another day) slid around his side nearly depositing her on the ground. Thankfully she had used a breast collar or she would have ended up under him.
To his immense credit, Eeyore stood still as she shifted back on top of him and then tightened her ever loosening girth while mounted. We let them stand for a moment before walking off and calming everyone back down. C was nervous and decided to hand walk for a bit which...eh...not my choice but whatever.
Once she remounted things were back to normal and we finished without further issue. I love the hunter paces but you really do run into some complete morons out there who have not a lick of sense or trail etiquette.
Of note, between getting lost and adding a mile plus, the incident and the never ending hand walking we ended up 40+ minutes slow and in dead last.
Not to end on a sour note though - the trail was amazing, the company was nice and I couldn't have asked for better behavior out of either boy. I found myself giggling out loud many, many times. Hamilton just lights up my soul and if I ever get convinced a heart horse exists, he will be the one to do it.

Posted by Sara (Moonlit Pastures) at 8:15 AM