Caught in the Act

There have been a few instances of late of the horses getting out of the pasture. It has always included Eeyore but since he has been with me more 3 years with no prior offenses I stuck up for him. I blamed Hamilton since this started after he came back from the trainer this summer. I thought maybe he was running Eeyore through the fence.

Then Gem, Eeyore and Hamilton were found running amok last weekend at o dark thirty. The pasture gate was wide open. The last person to close it was the Hubs so I blamed him for not paying attention and leaving the gate open.

Well….I was getting ready for work this morning and received the following text from the Hubby…

I had left the horses in the barn overnight to give them a break from the cold downpour that had started in the afternoon and was slated not to end until this afternoon. I know that stall was closed and latched. 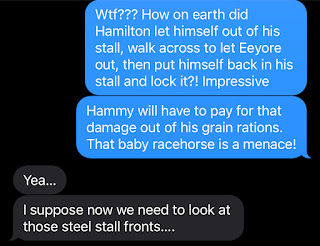 Guess I owe both Hamilton and Hubby an apology.