I generally like to spare you all on the boring details of trailer loading and travel except….

I made the hour drive without complication and was asked to pull all the way up the hill to park by warm up. No biggie until I pulled off the drive. There was a bit of a ditch to go down which I’ve done many times before having schooled xc here in the past. This time, as I went over I heard a very loud, heart stopping bang. I slammed on the truck breaks, hit the emergency brake as well, then exited the truck screaming “shit, shit, shit, shit”. Just my luck, B who was riding Eeyore for the first time, happened to be following me in. Great first impression.

I immediately called Dusty (after making sure the boys were ok) who jumped in the van to come help. Meanwhile I had the worst parking job ever in a big open field. I was blocking the entrance but there wasn’t much I could do. I apologized to the people who pulled in next to us. The guy was super friendly and looked things over. He said that I had the wrong size ball which made me go hmmmm…because I hadn’t changed it and we’ve been pulling this trailer for a decade now.

Well…apparently the hubs had changed it out to help pull a trailer a while back. No clue how we managed to trailer up to KY twice plus go to other trails and paces without issue. Again, super lucky. Also super lucky that the hubs had volunteered to hook up the trailer that morning so he couldn’t blame me. 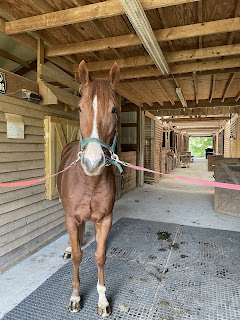 B and I got ready to ride while Hubs made his way to us. I mean..why not ride? Nothing else to do right?

I was super excited for B to be on Eeyore as she is an eventer so I knew she’d let him have some fun over the jumps. Both boys unloaded fine even after that disaster. Before I knew it we were off to the start. I don’t know what bee got up Hammy’s bonnet but he refused to go past the starter table. I think he got distracted by the dog in a fence on our other side, then Eeyore moved on without him and he lost his mind. There was much spinning, backing up at speed and an attempt to pop his front legs up. I called out to B to bring Eeyore back and Hamilton settled. Baby horses I guess?

Things moved well from there for a long while. We trotted, cantered, trotted some more. I had warned B that Eeyore has started to dislike creek crossings for some reason and Hamilton had never seen one so be careful. We quickly came to the first of many water crossings and both boys went right over without batting an eye. Most of the beginning was in the woods. 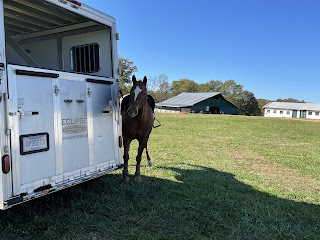 We popped onto the back side of the cross country course but without any jumps around. The weather was still cool so we moved up to a lovely hand gallop. This ranked top 5 best horse experiences ever for me. Hamilton flew but I couldn’t even feel his feet hit the ground. The terrain had almost evenly spaced out humps that we crossed over. He handled them like a pro. My grin was hurting my face. B was grinning and praising Eeyore as well. It was magical.

It was also the last bit of fun I had for a few miles. We let the boys catch their breath then found ourselves at the bottom of a nice grassy hill. Hamilton had made his way in front of Eeyore when B asked if we could go again. I said sure but didn’t realize she’d jump straight into a canter beside me. Eeyore shot off and Hamilton lost his mind. I have no idea how I stayed on him except my saddle is amazing. He reared and spun left at the same time then hopped up a few more small times for good measure. I got him settled and asked if we could walk for a bit. I needed my heart to settle as much as Hammy did. 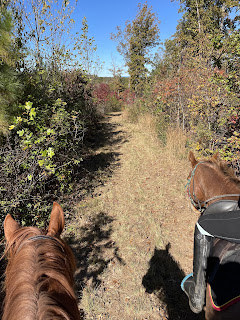 The trail then wound through the xc course for a couple miles. Poor Hamilton was unnerved. Those jumps freaked him out something fierce. I made the comment several times that it was a good thing I didn’t get him to be my event horse. His back was tight, his head was up and he was majorly not happy. When we came to the smaller jumps towards the start of the course I told B to head over and do the warm up cross rail to get used to Eeyore then she could do the little starter fences if she wanted. No pressure. Those two headed off and Hamilton could not live anymore. He was spinning, backing up at speed, going sideways…I called it quits and jumped off him so B and Eeyore could enjoy themselves. They did a few fences then Hamilton let me use a Training fence to get back on him. Not sure why that was ok but whatever.

We walked the rest of the course, though we did play in the water complex a bit. Both boys went right in. Eeyore took a long drink while Hamilton tried to roll. We left there and followed the course a bit more before diving back into the woods again. Hamilton never did settle until we got away from the jumps. 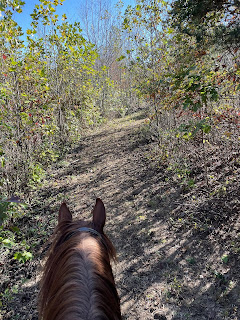 Once back in the woods, Hamilton took the lead again. We had a lot of fun trotting and cantering through the twisting single track though power steering was a bit hit or miss. I began calling out the turns for B’s sake as they were 90 degree out of nowhere turns but most of them we blew right past. Then on the very final right turn, we were flying up a hill when I called out “right turn” and Hammy turned beautifully without slowing. I was so so proud! I screamed “good boy!!!” and gave him all the pats.

Before we got there though we wound through the forest for what seemed forever. Eeyore was slowing way down. Even Hamilton wasn’t asking to go nearly as much. We only encountered one more issue. We had three more creek crossings, all no big deal. Then we hit the fourth. I don’t know what was different but neither boy was crossing. Another rider came up and gave a lead but Hamilton needed more time to mentally process. Once Eeyore was across, Hammy was still on the other side and now his brain melted again. He wasn’t ready to cross but he also wasn’t happy being alone on this bank either. I hopped off to hand walk him across when he leaped and nearly landed on me. But he crossed so he got a lot of pats before I climbed back on.

Shortly after we had the final crossing which was super wide and super deep. Like came up to his belly deep. I thought for sure I was going swimming. Hamilton stopped to have the world’s longest and groaniest pee ever  right as Eeyore started across. I yelled to B to please stop so we didn’t have a repeat issue. They hung out in the middle while Eeyore gave us major side eye, Hamilton finished peeing eventually then walked across like the previous crossing issue never happened.

At mile 7.25 we saw a SUV on top of a hill. There hadn’t been a half way stop yet. We looked at each other grimly declaring that if this was a 15 mile ride we’d DNF and cut through the trees to get back. Thankfully it was only a spotter in a difficult section. It was only a mile back.

The rest was uneventful. Both boys made it back to the fixed trailer sweaty and tired  B praised Eeyore a ton and even threatened to steal him. Honestly his behavior has only improved with every outing. Unlike his younger brother who seems to be getting worse each time out. I didn’t get after him though. Being left behind isn’t fun. Having your partner spook you as they pick up a gallop right beside you isn’t fun. And apparently he is deathly afraid of solid fences strewn about open fields.

The rest he was amazing for. A long gallop up a big open field? Polite and light. Twisting forested single track both following and leading at a good speed? No problem. His first ever water crossing? No problem? His first ever extremely deep water crossing? Also no problem. So really it’s a big win. He is only 5 and been off the track for 1 year though most of that he sat to gain weight. I’ve only taken him on trail a total of 4 times and this was his third pace. I’m nowhere near an expert here but I think we are doing ok.