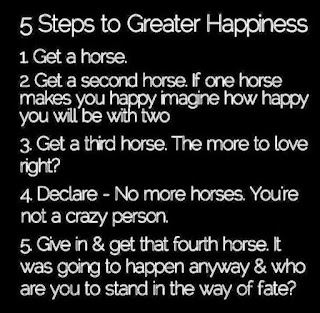 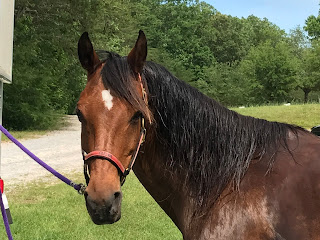 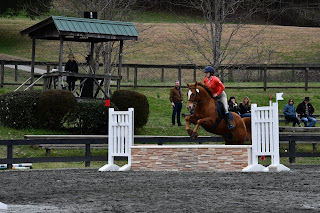 Step 3: May as well get Hammy. He needs a lot of TLC and is the polar opposite of Eeyore so that will be nice. 2020 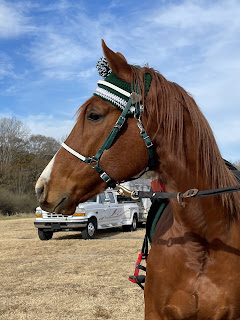 Step 4: I’m done. I have all that I need. A batshit crazy jump horse who exhausts me 10 minutes into a ride. A sloth who I could sit on for days and never tire of. Seems perfect.

Step 5: The horse I had wanted before but sold mere hours before I put in an offer comes back up. The seller personally messages me giving me first right of refusal before going public. Figure it was fate and who am I to tempt fate? Get Leonard with no amount of common sense or plans. 2021 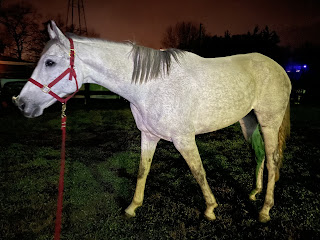 Running has been a part of my life for over two decades. It started back in 9th grade when I made a deal with a friend to join track if she joined Life Time Activities with me.  Prior to that I had never run outside of the forced timed mile in gym class. She quit both clubs in favor of boys and drugs the following year. Here I am over twenty years later still enjoying the things I learned with both groups as well as being in contact with some of my best friends from LTA.

The pinnacle of my running career was completing four half marathons the summer of 2012, right before Wyatt was born. I was bent on getting as much in as I could knowing full well how time would be limited once we came home with him. Balancing a newborn, surgical residency, horses and job hunting on the other end of the country was difficult at best.

Things chugged along with late evening short runs around the neighborhood on days Dusty stayed in with him. Since he went to bed at 6:30 pm, one of us would stay inside with him while the other participated in their hobby. Since my time was split between horses and running, my running mileage was limited. It still happened though.

Flash forward to 2015. I began to have some nagging annoyances that only occurred when running. Walking, hiking, riding were all a non issue. I plugged away at it, ignoring what I could until I finally couldn't anymore. The nail in my running coffin was a sharp, stabbing, shearing pain that ran down my left buttock after only three steps of running. I went to PT where I was given exercises but nothing worked. The moment I took my third consecutive running step, I was done.

In the fall of 2016 I endured the 30 mile Ride and Tie Championship course thanks to a partner who was willing to do more than her fair share of the running miles. It was brutal though worth every single painful step. Come 2017, I hung my running shoes up for good.

And that was when I thought my running story ended. I was sad though relieved to no longer fight through the pain. Maybe 15 years of running was enough. It nagged at me though. I always loved lacing up my shoes exiting the front door not knowing exactly where I would go. The challenge of hitting certain distance or time markers. The feeling of movement in my body. I see so many people every day in my medical practice who physically can't run due to neurologic, orthopedic or cardiovascular failures. I always enjoyed running because I still could.

Then in October of 2020 I was diagnosed with a large benign tumor in my uterus. It was pushing on my bladder (hence the constant need to pee when I ran as it jostled irritating my bladder) as well as a neurovascular bundle in my left pelvis creating that sharp stabbing pain as ischemia and nerve entrapment settled into the muscle group. A hysterectomy followed in November 2020.

I took my first tentative running steps in January 2021. I was nervous as all get out. What if it hadn't been the issue? What if I ran and all those symptoms remained? To this day, 13 months later I still get nervous when I head out for a run. Any minor twitch, tightness or not quite right feeling is amplified in my mind.

From the get go my symptoms, as well as a host of others I had thought were normal but apparently were not, vanished. Not only could I run three consecutive steps in a row, I could tackle terrain issues, speed work and increasing time on my feet. Wanting to take things carefully, I found an online program that took 6 weeks to get to running 30 minutes straight. It began with a lot of walking with short bursts of slow jogs slowly increasing with each day until finally on run #42 I made it 30 minutes without stopping. I was elated. I cried. I danced.

From there I continued a cautious program of increasing time running while protecting against injury. My first major goal being reached I sought a new one: a 5k without stopping. I found a program through Yes Fit that was free. It included stretching and light strengthening which helped me considerably. Then on 12/8/21 I set off after work with my new running skirt to hit a trail I had never run before. It was harder than I anticipated with a lot of steep climbs, but I made it. 3.20 miles. I cried again. 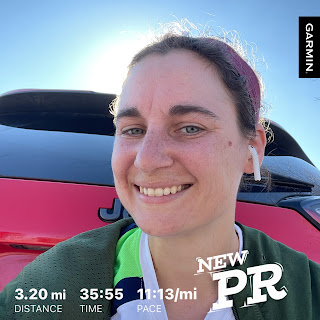 Making sure to end the year on a good note, on 12/19/21 I packed the car up with the kiddo, his bike and the Hubby and hit a different section of the same trail. My goal was 3 miles. That trail was my favorite of all time: rolling hills. I love being able to switch up major muscle groups with climbs and descents. When I looked at my watch I had shaved 45 seconds per mile off my prior pace. I was elated. Guess what I did?? I cried. 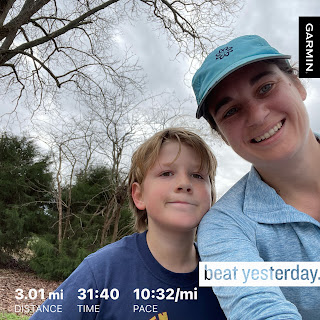 I never thought I'd be here. I never thought I would be back to running at all let alone enjoying three miles at a decent pace. Even on the most difficult run when the weather is blisteringly hot or freezing cold, the terrain is harder than I planned, my head isn't fully in the game, I am grateful for every single step I am taking. Not a single step is taken for granted. I've worked long and hard to get here. I'm thrilled to be where I am at. I can't wait for the future.

I rarely make long term goals. It only seems to breed disappointment when life unfailingly interferes. A single goal seems to zap away the fulfillment of all the hard work it took to get there which to me is so much more important than a single outing. I do however have a goal for 2022, if it pans out. I won't be hanging my hat on that though. I plan to fully celebrate every single milestone along the way regardless if I even make it to the race or not. My goal is to complete the Dark Horse Run 25K in October 2022 which takes place along the cross country course at the Tryon International Equestrian Center. I walked part of the 5+ mile looped course this past fall after the Hubby completed the 50K there and fell in love with the course. I'd love to run it myself.

Entering 2022 I feel a lot of gratitude for the surgeon for fixing me, for a body that is working again, for movement and for online races/challenges to keep me motivated. Who knows what the year will bring, but I am hoping it holds a lot of fun and challenging miles spent in my cute running skirt and running shoes.

Ok..so this is a little late as he came home in October 2020 and now it is the beginning of December 2021.  I've been lax in getting actual decent, not stuck in the dusty barn on cross ties, photos.
When he first arrived, he was emaciated. Not only were his ribs showing, you could sink two fingers between each. His topline was so sunken that I worried he had a spine issue. Lets not forget his complete lack of any butt musculature and the fact he was covered in rain rot and open sores.
I didn't take very many pictures as I honestly didn't want to remember his looking that way. Looking back now I wish I had better shots of just how bad off her was. It was terrible.
He was such a good natured guy it broke my heart he had ended up like this. I mean, he last raced in July and this was only October. Did they forget to feed him at all after he last ran?!
Its been a wonderful year with Hammy. He is exactly what I had hoped for. Eeyore can be very mentally taxing. You always have to be on guard with him to keep his toddler antics in line. Under saddle he is a different horse every single ride, full of opinions he isn't afraid to express. I had wanted a horse who would be easier. I still remember my "friend" and fellow blogger who made fun of me behind my back for telling her that I got Hamilton for that very reason. Hammy is exactly that.
On Saturday I took Hammy out for his first time without his track pony, Eeyore, as an emotional support friend. With semi decent lighting plus the ability to get far enough away to snap a full body shot, I was able to snag some pictures to show what he is looking like these day.

Hamilton is Hamilton always and forever. His ground manners are impeccable, he takes new things politely even when hesitant, and beyond some minor baby brain melting moments he has been the easiest horse I have ever been around.

I have big plans for this guy which include many, many, many hours spent together. Honestly I can't imagine doing it with another horse.  He continues to show me what Type 1 Fun is all about even at 5 years f age with only having ridden him a literal handful of times. I can't even begin to imagine what he will be like with more time and experience. The sky is the limit with this guy.