Last weekend Hamilton and I hit my favorite trail system up for our first solo ride. I never blogged about the last ride we did where we met up with a friend for Hammy’s first solo trailer out experience. Honesty? It was foot perfect boring in the best way possible. The outing made for the perfect intermediary step from traveling with his track pony together to going out alone but meeting up with a riding buddy. It was high time to go alone though, so we loaded up and headed out. 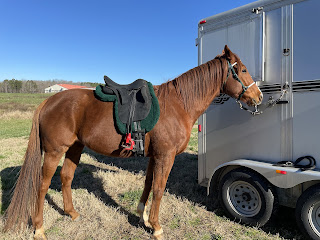 Hamilton unloaded just fine and stood like a gentleman at the trailer to be tacked up. He is getting way better at standing still to be mounted which is a relief since he is way too tall for me to be climbing on from the ground without wrenching his poor back.

He had a moment of “I don’t want to” at the trail head heading down away from all the trailers. While the behavior isn’t good, his go to evasions are either to first stop then slowly back up which is so damn safe that I find myself remaining relaxed and happy during the negotiations. It took 3 minutes to convince him that we really were going off alone. 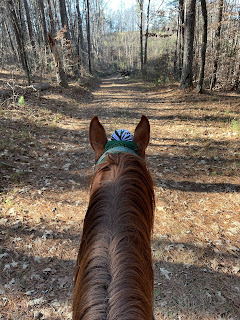 Then at the bottom of the hill we hit snag #2. Someday I’ll take a picture but there is a bridge leading into the woods. It’s a pretty shitty bridge. First it is under the trees which is always dark compared to the bright sunlight of the hill. Second it is only one horse width wide with tall sides making a not very welcoming shoot. Last, they have rubber mats on the ground which are always covered in slippery moss making the footing iffy. I anticipated some issues here.

Hammy had no interest in crossing that bridge. It took another 3-4 minutes of patiently insisting that he crossed, turning him when he tried to back all the way up the hill to the trailer, and patting any forward movement. The patient, relaxed approach paid off in the end when he calmly walked across without any tension or ill will. 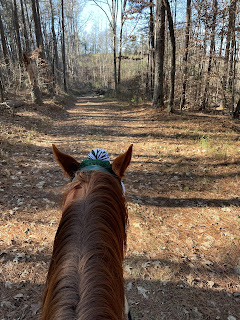 From there things were good to go for a long while. We trotted some when I trusted his balance, walked a lot. He crossed two more smaller bridges without hesitation. We were passed by a few hikers, but saw no other horses on the trail.

We eventually made it to my favorite view of Lake Hartwell with mountains in the background. I hadn’t planned to stop to take a picture but Hamilton saw a scary pipe on the trail edge which caused another moment of “Nope, can’t do it. Let’s just go home instead” so I took advantage and snapped a pic.

By this point he was figuring out that stopping wasn’t going to get him anywhere so the conversation was a lot shorter before he walked past the scary pipe with pinned back ears and a lot of snorts. I laughed and patted him telling him how brave he was.

Over a few more hills with some really awesome trotting later we came across his arch nemesis: water crossing. He hates it. He even hates puddles but sorry buddy. Water is a part of the trail life. We stopped at the crossing (his idea not mine) and began our backing up, turning, stopping dance. It was taking a long while. Eventually I hopped down and hand walked him across which he did without hesitation. He will follow me anywhere. We walked back and forth several times then stopped in the far side planning to turn around and head back the way we came to head home. It had been a while with a ton of en yak challenges for him and I wanted to end on a good note without over taxing him. His last major task was to cross the water to head towards home. 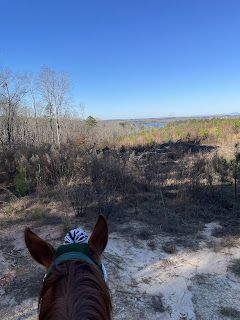 I managed to get on board and off he went without an issue. The way home took significantly less time than the way out had. There were several discussions of being polite and not galloping off to the trailer. I’ve run across the home fight with every horse and generally prefer to go in a large loop than an out and back. It’s a skill he needs to learn through so I made him walk a lot, trot some and canter only when he was being polite and relaxed. 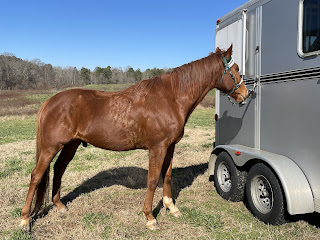 It was a great first solo outing. We both remained relaxed the entire time, he finally did a polite water crossing and we ended with a smile. Hamilton continues to teach me what Type 1 fun is all about.

Posted by Sara (Moonlit Pastures) at 8:58 AM