After months of tweaking, adding, monitoring and waiting I finally had enough. Leonard is too skinny for my tastes. My last hope was that the addition of Cool Calories would make the difference, but honestly it hasn't done a dang thing.

Currently he gets 6 lbs of Triple Crown Complete, 6 lbs of alfalfa pellets, a squirt of GutX and 4 oz of Cool Calories a day plus all the pasture and hay he could want. I really don't want to just keep upping the volume on him but I was at a bit of a loss as to what was going wrong. Hammy eats only 4 lbs of Triple Crown Complete, a squirt of GutX, pasture and hay and is borderline chubby, so....?

Part of the issue is that the last dentist (prior to me getting him) over floated his teeth to the gum line making chewing hard. I soak the grain and pellets and he soaks his own hay so we are handling that as best we can while we wait the 1-2 years predicted for his teeth to erupt enough to be normal. Don't overfloat your horses, folks.

But obviously my current feeding plan isn't working. I asked the vet during his lameness eval what his thoughts were. He said that Lenny will only be on the lanky side, he is 17.1H of all legs, but his topline was pretty non existent which was making him look a lot skinnier than he is. He recommended Purina Super Sport and I filed it away as something to think about. I'm super slow to add supplements because a) they aren't regulated so it is really pure luck that you actually get what the label says and b) no real science behind most of it. Purina Super Sport does actually have science behind it though. I can't find the study to link here, but there is a study where they used US to measure the thickness of the topline musculature before starting and then against a control group with the same feed and exercise but not getting the amino acids supplement and there was a scientifically significant difference at the end of the study in the experimental group. Interesting.

I still wanted to check on the rest of my diet plan though so I scheduled a call with an equine nutritionist to go over Lenny's diet. Turns out I was doing all sorts of things wrong. Womp womp. Sorry buddy.

The biggest issue are the alfalfa pellets. Apparently the pellets are considered a concentrate, not a forage, and by feeding a large quantity at the same time as his grain all I was doing was pushing the grain through his GI tract at a speed quicker than he could digest it. Basically I'm starving him while over feeding at the same time. Thats a great feeling. She instructed me to switch to alfalfa cubes which are considered a long stem forage and will slow the GI tract down allowing for better absorption of the nutrients from his feed.

She also suggested that I switch him to a senior feed. I made sure she knew he was only 8 years old. She stated that the senior feeds are better for harder keepers due to the nutritional profile. She really wasn't a fan of any one brand over another, but I asked her specifically about the Tribute line since that is a brand I am a fan of. I think these facts are no longer true, but they use to be a family owned mill in Ohio that only did horse feeds. I think I heard somewhere that they now also do poultry feeds as well, but don't quote me on that. Anyway....Gem and Pete have done amazing on the Essential K ration balancer for years now and my local feed store carries it. They have a few different senior feeds and she recommended the Senior Sport.

Her plan to start is to switch him to the Tribute Senior Sport at 4.5 quarts a day and add in the Purina Super Sport to help his topline. Leave out the alfalfa pellets and the Cool Calories. If after 2 weeks he isn't gaining like I want, add in the alfalfa pellets. Wait 2 more weeks and then add in the Cool Calories if needed. She said that the issue with too much fat is the same as too much concentrate - it will push the feed through the GI tract too fast for absorption. She wants me to add int he fat only if absolutely necessary.

Oh and keep the GutX.

We will see how this goes. While my local feed store carries Tribute they don't stock the Senior Sport, so I ordered it plus had to order the Super Sport as well. Once they all arrive I will slowly switch him over and wait and see how things go. Hopefully all these changes get us on track for a rounder Leonard.

The Universe Always Has The Last Laugh

Remember two weeks ago when I was all “it’s only a sprain, a quick fix, in 4 weeks we will be trotting and be jumping again by fall”??? HAHAHAHAHA!!!!

Lenny is back in prison. Honestly, being on stall rest for the month of August isn't the worst thing that could happen. It is ridiculously hot and humid, so riding has been 15 minutes of light work anyway. Spending the hottest month of the year with a large fan blowing on you as you munch an endless supply of hay with two fresh, ice cold water buckets at your disposal isn't so bad. 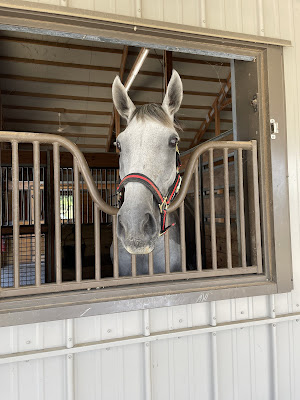 I've had a nagging feeling something wasn't right with his right hind ever since he cut it way back in February. He had undergone vet eval including xrays when it happened (recall he freaked out when I took Hammy for a trail ride, I checked in with Hubby who assured me he was handling it fine then came home to a bleeding, fat right hind leg that took a month of stall rest and wound care to heal) and he was so new to me that I had a hard time sussing out what was his normal versus really normal, but over time it became more clear that something just wasn't right back there. It showed up as a stickiness to pick up the left lead canter, less willing to travel straight tracking left, always hitting the poles with the right hind. 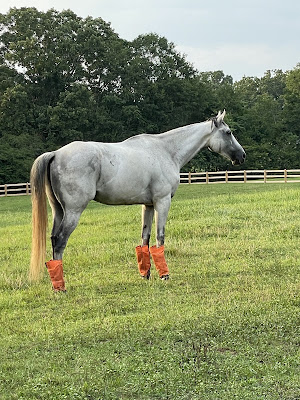 I hauled him up to the bigger hospital in Tryon for a second opinion. This is where I learned about the Butt Bob. Pretty much everyone is familiar with the head bob that highlights front end lameness. Well, it turns out that there is an hind limb equivalent: the butt bob. As we watched Lenny trot away from us on a transitional floor from soft to hard ground, the vet pointed out that his right pelvis was heading upward as the hoof hit the ground instead of staying level like it is supposed to. This is a protective mechanism to offload the forces to the hind limb. I had never noticed it before, but once he pointed it out to me I couldn't help but see it.

The appointment went as well as lameness exams can go. Leonard was a super good boy through all the flexions, lunging (I didn't even know he could lunge), pokes and prods.  I held my breath a little through the flexions since I never had a PPE on him. How shitty would it have been to flex positive elsewhere too? Good news was that he flexed beautifully sound everywhere. This vet was extremely thorough and even did upper limb flexions which I had never seen before. The only thing really of note during the flexions was that he didn't get any worse to the right limb except when he flexed the left hind, he trotted off slightly more off on the right hind likely from having to bear full weight to that leg while the left was being flexed.

We decided to move to blocks first before doing diagnostics which maybe I probably didn't have to do. I could have skipped that step and just did the xrays and US but who needs money? The blocks were really not very helpful. He showed no change at the fetlock level, 50% improvement if we squinted hard at the suspensory level, and then nearly perfect at the hock level. Vet said that it could either mean the hock was the issue or it was high suspensory and the higher block caught what the lower one didn't. It was neat though to watch the butt bob finally disappear once we blocked basically the entire leg. So while we could rule out lower stuff, we were still left uncertain at the root cause. 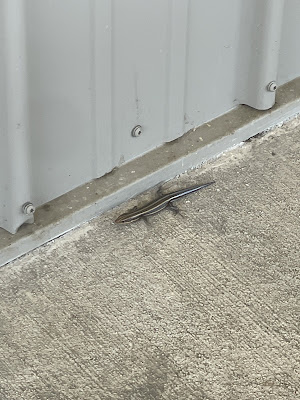 He recommended xraying the hock. If it looked gnarly we could avoid the US. Those xrays looked gorgeous. The vet looked at me and said" had you sent me these for PPE I'd tell you to buy him straight away." You'd never had known he raced 25 times. Of course this meant the hock wasn't the issue, so an US it was. At this point I was running out of optimism. I pictured a massive chronic hole in his upper suspensory that would mean 12 months of rehab or career over. The vet told me not to fret so much just yet, but how couldn't I? The easy stuff was all ruled out.

Well, the result was better than I hoped and actually maybe kinda inconclusive too. The suspensory looked pretty darn good. No tear. No hole. Mild thickening. Mild fluid. Maybe some areas of disorganization. Nothing too alarming. Since he did block out of the butt bob from the hock down, it didn't make much sense to blame it on the SI or hip itself as those two things weren't touched by the block. End result was calling it a high suspensory strain. Since we didn't US the area back in February when I think he injured it in the pasture, we aren't sure if maybe he did damage to it then and this is the result of healing over the last 4 months or what.

Doesn't really matter though I suppose. The treatment plan is 30 days of stall rest with both hand and tack walking permitted as long as it is on flat, firm surfaces like the arena. No super deep sand footing, no hills, no pole work. He wants him in a flat bar shoe to prevent the heel from being able to flex down, likely to stay in that for 3 shoeing cycles. Honestly that is the worst part for me as I hate hind shoes, but it is what it is. He talked shockwave and laser and since I have access to a class 4 laser through the Hubby I opted for that. The Hubby will bring his home to use 3 times a week. In fact, he used the laser on Lenny's wound way back when too which may have helped any suspensory injury a bit before as well.

He is very optimistic that this will heal uneventfully with minimal rehab needed. In 30 days we will get a new US. If that shows the current mild changes are gone we can then begin trot sets and small turn out. We can be back to cantering and small jumps by Halloween, so really not the worst news that could have come from this appointment.